The canalized BLAVET valley, far from urban centres, has preserved a heritage of high quality, both in the field of religious architecture and rural construction.

The patronages of the great aristocratic families, first of all those of the Viscounts of ROHAN, suzerains of the territory relayed by the RIMAISONS or KERVENOs, are largely responsible for the construction of high quality buildings, of which the SAINT-NICODEME chapel in PLUMELIAU is the most impressive example.

Many pilgrimage chapels have been built on the territory, such as LOCMARIA and SAINT-FIACRE in MELRAND, SAINT-ADRIEN in SAINT-BARTHELEMY and MANEGUEN in GUENIN. 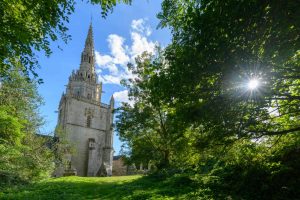 Their construction is also caused by the donations of the rich surrounding rural society, which built from the 16th to the 19th century a habitat often of high quality reflecting the wealth of its members, a third of whom owned its lands and houses from the 17th century.

Often on two floors but always including a part reserved for crops and livestock, these houses rival those built for another privileged social category, the clergymen.

13 of their houses have been preserved in good condition, mainly from the middle of the 17th century during the 19th century.

The BLAVET pipeline, the creation of roads and railways contribute to opening up the country. While industrialisation remains modest and has left no traces, civil engineering structures, bridges or locks bear witness to a serial architecture designed by engineers.